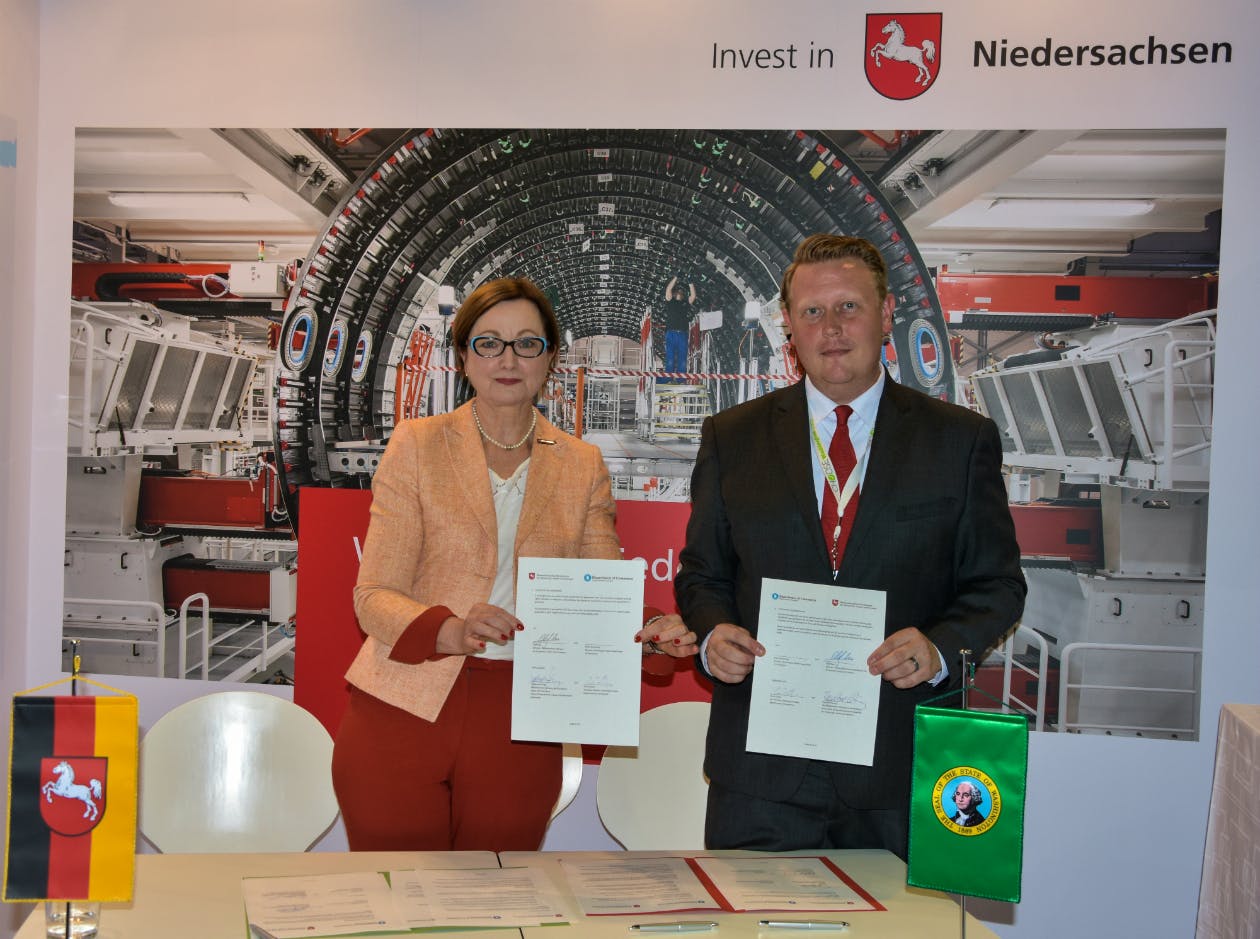 Niedersachsen at the International Paris Airshow

Niedersachsen attended the Paris Airshow, held from 19 to 25 June, and presented its strong points as a business location. A highlight of the week was the signing of the MOU (Memorandum of Understanding) between Niedersachsen and Washington State.

In the course of the Airshow in Paris, Niedersachsen and Washington State signed a new MOU on 20 June. This political agreement confirms the partnership of the signatories, especially in the aviation and aerospace industries as well as in the field of renewable energy production. This has laid the foundation for more intensive exchanges in these areas of technology. This will make it very much easier in future for partnership agreements to be implemented.

The MOU was officially signed by Ingelore Hering, head of the Industry and Maritime Industry division at the Ministry for Economy, Labour and Transport of Niedersachsen, deputising for the Minister of Economics Olaf Lies, and by Brian Bonlender, Director, Washington State Department of Commerce and Chris Green, Assistant Director, Washington State Department of Commerce. The signing was followed by a reception which was attended by over 50 company representatives from the aerospace industry of Niedersachsen and Washington State.

The Department of Commerce of the American federal state of Washington and Ministry for Economics of Niedersachsen have enjoyed close ties for many years, especially in the fields of aerospace engineering and renewable energy.

Visitors to the Paris Airshow were able to visit the Niedersachsen stand during the week of the trade fair and find out about Niedersachsen’s strengths in the aviation industry and as a centre of business generally. As well as offering information about Niedersachsen as a centre for the aviation and aerospace industries and possibilities of corporate relocation, the federal state’s attendance of the event offered plentiful opportunities of forging new contacts with international networks in the aerospace and related industries, and building on existing ones.

The International Paris Air Show is an international trade fair of the aviation and aerospace industries, which takes place in Le Bourget, near Paris, every two years. This is the biggest and oldest aviation trade fair in the world, and is a place where the principal players of the industry come together. It is a showcase for the most recent technological innovations of the aviation and aerospace industries. In 2017 the event clocked up over 320,000 visitors and around 2400 exhibitors.